In Human Rights Approaches to Climate Change, Sumudu Atapattu, links the challenges of climate change to a human rights framework, with an emphasis on the international legal implications for climate change mitigation, adaptation, and 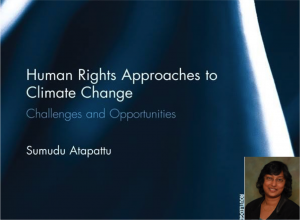 adjudication. In addition to looking at specific issues, such as citizenship and access to resources, the book examines the disproportionate impact of climate change on certain groups: “climate refugees”, indigenous peoples, and women.

In her discussion of “Women, climate change, and inequality,” Dr. Atapattu describes how climate change will exacerbate existing inequalities and vulnerabilities. Gendered power differentials in many parts of the world already result in disproportionate workloads, higher levels of poverty, and greater human insecurity for women, disparities that are likely to be aggravated by climate-induced migration and extreme weather events . Using the Convention on the Elimination of all Forms of Discrimination Against Women (CEDAW) as a framework, Dr. Atapattu argues that existing agreements and policies, including UNFCCC, run the risk of gender-blindness. This could result in adaptation and mitigation plans that are insensitive to the unique ways that women are affected by climate change.

Human Rights Approaches to Climate Change can be purchased online. Sumudu Atapattu is a 4W leader, professor of environmental law, and the director of UW-Madison Law School’s Research Centers.